Lisa Nicoll is a producer, playwright & actress who trained at the Royal Scottish Academy of Music and Drama. Between 2013 and September 2017 she was a producer at the Tron Theatre Glasgow. In this position she developed new writing, created The Progressive Playwright Award for writers, programmed work, secured funding, set up and ran The Tron 100 Club - an artistic membership for creatives and created and produced the Tron 100 Festival - a festival of 30 short plays.

Lisa established and is now Creative Director & Producer of new writing theatre company In Motion Theatre where the aim of the company is to support, develop and tour the work of the company, and that of other writers, across Scotland and beyond and also to support and nurture professional talent in the areas of acting, playwriting, directing and producing under their Creative Development CRAFT banner. Lisa is proud of the funding she secures to keep the company sustainable and support the work of creatives and always looks for various avenues to be able to do this.

In 2016 In Motion Theatre toured Lisa’s commissioned play Where the Crow Flies funded by Glasgow City Council across Scotland and then in the spring of 2018 funded by The Big Lottery the company toured with Lisa’s play Shattered to fifteen theatres across Scotland. Having been part of the Paisley 2021 bid for the city of culture Lisa has been commissioned to write a new play 2021 and has also secured funding from Renfrewshire Arts & Leisure to tour both Scotland/England and Northern Ireland.

Between 2008 and 2013, Lisa wrote, produced and toured theatre work all across Scotland under her own name including her self-penned one woman plays Acceptance, Touched & Home Run . Acceptance toured for six years to venues across the length and breadth of Scotland funded by various public & private sources. Off of the back of this play she was also commissioned to write the main characters diaries in The Metro Newspaper for ten weeks.

In addition to this she was commissioned to write short novel Leathered for teenagers and secured funding from various sources to produce and write & produce eight short films which combined community casts with professional actors. Lisa has often worked with the Playwright’s Studio of Scotland where she was also mentored as a playwright by Tanika Gupta and while developing as a playwright wrote many short plays as part of the Traverse’s short play writing nights.

As a playwright Lisa has also been involved in a variety of community based work including working with such charities such as The Princes Trust, Children First, The Scottish Cot Death Trust, Waverly Care. In this context Lisa was also a writer in residence at Castle Huntly and Noranside Open Prisons in 2008/2009.

2018/19 also saw Lisa work with Sky Arts as a script developer for Martha Keith Barnett’s play And The Band Marches On which was presented at The Bush and Barbican Theatre as rehearsed readings in spring 2019. During this time & both funded by Creative Scotland she also worked on the script development and producing of rehearsed readings of Jennifer Adam’s new play The House That Melts with The Rain which was performed at The Roxy Assembly in Edinburgh and the development and producing of Jo Lennie’s play Lily – A Play with Songs which was originally the recipient of The Progressive Playwright award at The Tron in 2017 and was presented as a reading at The Traverse Theatre in spring 2019.

2019 has also seen the commission of another new play for Lisa from Outspoken Arts where she has been commissioned alongside Alan Bissett, Louise Welch & Zoe Strachan to write a series of monologues which will tour together.

Lisa also has a strong passion for film with the most recent film she produced in 2017 Natalie (Blazing Griffin), by Mikey Murray and featuring Kate Dickie, having great success at The Edinburgh International Film Festival, Berlin Short Film Festival, Aesthica Film Festival and The British Urban Film Festival.

As an actress Lisa has worked for BBC Radio, STV, Discovery Channel, Mark Goucher, BBC Worldwide, Blazing Griffin and Cumbernauld Theatre. Lisa is a firm believer in making things happen for the artistic community and supporting and developing creatives in new and positive ways.

Allie has extensive experience as a freelance director/movement director. She is directing the Mull Theatre production of Here I Belong this Autumn and is developing the Tron Theatre’s Progressive Playwright Award winning play Lily with In Motion Theatre Company. She is also working on the development of CULT with Helen Milne Productions.

Other recent credits include A Game of Death and Chance (co-directed with Ben Harrison for National Trust for Scotland); Letters to Myself (UK tour); Descent (Oran Mor, Traverse, tour and nominated for two Critics Awards for Theatre in Scotland); Netting (Oran Mor, Lemon Tree and tour); What Sam Told Me (Theatre 503); Toilet (Southwark Playhouse).

Allie has worked with leading companies all over the UK including Clean Break, The Royal Court, Mercury Theatre Colchester, The Traverse, BAC, The Old Vic, The Gate, The Tron, and the Arches. She was Associate Artist with Company Chordelia (2013-2015), works as a dramaturg and is a script-reader for the Traverse and the Bruntwood Prize.

Allie is also a jazz dancer and teacher. She specialises in the swing dance styles of the 1920s-40s. Allie’s main style is Lindy Hop, one of the best known and loved swing dance styles that originated in New York in the late 1920s. She also dances Charleston, Collegiate Shag and solo jazz. Allie teaches with Glasgow Lindy Hoppers and Glasgow Jitterbugs and holds workshops and private lessons.

Corinne's producing experience stems from working as Administrator for various theatre companies and venues since 2007, before she took on the role of full-time Shared General Manager for a consortium of new writing theatre companies - nabokov, Theatre Uncut, Forward Theatre Project and Pieces Productions - from 2013 to 2015, in an innovative cross-organisation role funded by the Paul Hamlyn Foundation. 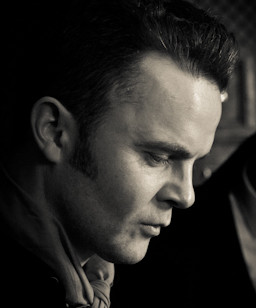 Biff Smith is a Glasgow-based singer-songwriter and frontman with the band A New International, with whom, and as part of their previous incarnation as The Starlets, he has written and recorded five studio albums, plus two compilation albums of previously unreleased material, released in the UK, mainland Europe and Japan where Smith has toured regularly, both with the band and as a solo artist.

Smith’s most celebrated collection of songs so far is A New International's debut album “Come to the Fabulon” which was recorded at Yellow Arch Studios, Sheffield and produced by Colin Elliot (bass player and producer for Richard Hawley).

“a majestic, distinctive piece of work.. one whose grandeur and ambition speak of resonant self-confidence..irrepressible and easy to adore “ - Scotland on Sunday

"one of the most lush collections of sheer pop majesty you’re going to come across this year." - Is This Music?

The Fabulon tour to introduce the album to the world stopped at Glasgow, Edinburgh, Dublin, London, Paris, Madrid and Cumbernauld.

More recent work has seen Smith collaborating with acclaimed theatre company Vanishing Point, writing the music for major new stage production “The Dark Carnival” which toured nationally in the spring of 2019, including a sold out week at the Traverse Theatre, Edinburgh. The show went on to tour further afield in Scotland as “The Dark Carnival-Unplugged”. Smith's songs written for the show were recorded by A New International and released as the album “The Dark Carnival”, once again produced by Colin Elliot, and was released in 2019 to accompany the show, receiving widespread rave reviews.

Biff is currently working with A New International on their third album, inspired by spies, revolution, epic voyages, tango and trombones.

SM Publicity is led by Sharon McHendry who has 15 years’ experience in news journalism and arts PR. She spent three years in a senior role at arts PR agency Mobius in London and four years managing PR for multi-arts venue The Arches, Glasgow. She also previously handled media relations for the Glasgow School of Art.

Sharon has eight years’ experience at the Edinburgh Festival Fringe which has included managing PR for Nic Green's award-winning Trilogy(as part of the Arches at St Stephens), Kieran Hurley's BEATSand Heads Up, Selina Thompson’s salt. (as part of Northern Stage at Summerhall),Kieran Hurley and Gary McNair’s Square Go and Tara Finney Productions’ The Greatest Play in the History of the Worldstarring Julie Hesmondhalgh (Broadchurch, Coronation Street).

At busier periods, Sharon leads a team of PR professionals with experience in the fields of entertainment, arts, culture and communication including Reuben Kay who supports Sharon throughout her work.

As a team, SM Publicity have managed campaigns for Northern Stage at Summerhall (Edinburgh Fringe 2016 and 2017), international showcase the Arab Arts Focus and for artists and companies in the UK and beyond during the Edinburgh Festival Fringe in 2016, 2017 and 2018 at venues including Summerhall, Assembly, Pleasance, Traverse Theatre and Underbelly.

Cameron McGarva is an actor and voiceover artist, trained at the Drama Centre London.

Perhaps more pertinently to the 2021 Project, he is also a former Hospital Social Worker having qualified in 2000 from the University of Stirling. The Podcast is a unique challenge in that he is combining his voiceover skills and experience with those of his social work training and career.

Cameron worked for a total of 24 years within the social work department in various capacities, most notably as a Renal Social Worker at the Royal Infirmary of Edinburgh for 7 years. This post saw him undertake work with a patient population suffering from chronic kidney disease which meant he was working with people of all ages and from a wide spectrum of social, economic and cultural backgrounds. He brings this wealth of experience to the 2021 Podcast.

He is currently in rehearsals for the Christmas Show at the Royal Botanic Gardens of Edinburgh and researching/interviewing for Phase One of the Podcast with InMotion. Voice wise, he has been busy on productions such as Outlaw King (Netflix), Beats (Rosetta Films) and the television series, Guilt, The Cry, The Victim and Clique (BBC).

David is working on Lily a Play with Songs and 2021 as part of the In Motion Team.

Jess designed In Motions tour of Where the Crow Flies and in now working on 2021 with the team.

She has worked extensively with the Tron Theatre, as well as National Theatre of Scotland (including costumes for Black Watch), Royal Lyceum, Communicado, Lung Ha, Grid Iron and Bristol Old Vic.